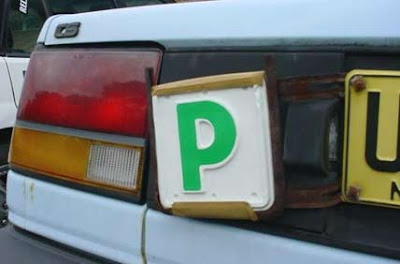 From the SMH website, originally heard on ABC 702 Radio.

"So you think junior is a little too lead-footed when he drives the family car? Starting next year, Ford Motor Co. will give you the power to do something about it.

The company will roll out a new feature on many 2010 models that can limit teen drivers to 80 mph, using a computer chip in the key."

I've only had a couple of crashes in my short driving life as a p-plater and none of them were at high speeds (We are not counting scraping the rear vision mirror of my mothers ENORMOUS Ford Farlane when reversing out of our tiny driveway when I was on my Ls, but again, it proves my point, as I was only going about 2-5km/hour). The fastest I have ever been travelling during an incident was 55km/h in a 60 zone, and some bitch pulled out in front of me and I nearly soared over the edge of a cliff in my boyfriend's BMW. A kindly tow truck driver rescued me for $20 and I returned to the road, to arrive at my uni's enrolment day a little bit shaken but fine.

I cannot stand the way this issue is misrepresented in the press. Yes, young drivers are over-represented in road fatalities. But not in high-speed road fatalities! My father is far more likely to cruise around at speeds upwards of 120km/h, because he feels he has the 'mad skillz' to handle it. I'm not even allowed to go over 100km/h, and I honestly didn't do it much. No one has the reflexes to handle a sudden change in conditions when travelling over 120 and when the maximum speed limit in most of this country is 110km/h, I can't understand why they make cars that go faster than that.

If you are going to limit the speed at which young drivers can cruise around, why not take a look at limiting all cars, and therefore all drivers? Stop singling out the highest profile group of drivers just because it sounds good in a press release and the media can rail against the filthy youth of today and all their high-falutin' hoon driving.
Posted by KettleBelle at 10/07/2008 11:39:00 AM