Alias was published as part of Marvel's MAX imprint for mature readers, allowing a more graphic story to unfold, which is perfect for the character of Jessica Jones. A former costumed heroine turned private investigator, driven by a fundamental urge to protect and help people in need but battling traumatic memories and damaging self-loathing.

It's written by Brian Michael Bendis and the majority of the art was done by Michael Gaydos, with covers by David Mack. 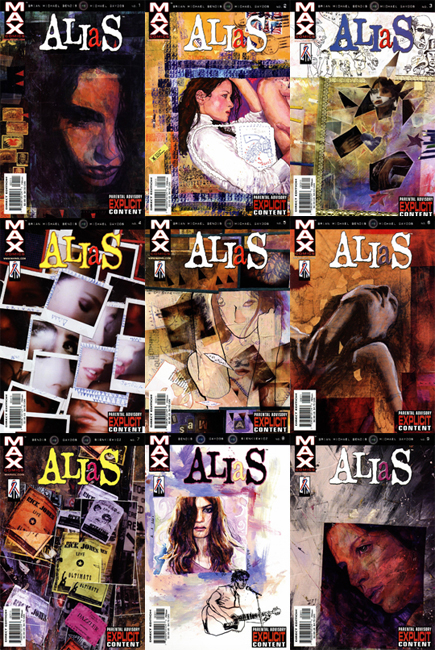 While investigating the disappearance of a woman, Jess gets caught up in a conspiracy involving the secret identity of Captain America (Steve Rogers). The scheme is masterminded by a wealthy criminal, who urges Jess to sell her surveillance tape showing Cap off-duty, fraternising with a woman late at night, before changing into costume and dashing off to fight crime. Jess refuses, and SHIELD swoop in and take the dude out, and Steve thanks Jess personally for acting in his interests in what he considers a distinctly heroic manner. Despite his reassurance, Jess has an extremely low opinion of herself, and is often seen chain-smoking or drinking heavily. We also see her engage in a night of unfulfilling sex with Luke Cage, a friend she avoids afterwards.

Jess heads to a small town to help search for a missing troubled teenage girl. The town is full of close-minded racists and anti-Mutant sentiment, and Jess is appalled by it. She has what looks to be a promising flirtation with a local police officer.

But since Jess is clearly intoxicated, he gets weirded out and leaves, and she's annoyed, and then she finds that the girl isn't really missing anyway she just ran off to the city to be around people who aren't small town fuckwits. Jess brings the girl home, only to discover that the girl's aunt had gone nutso and stabbed the girl's father to death, blaming him for her disappearance. The girl's mum tells her that it's her fault, since if she hadn't run away her father wouldn't be dead, and Jess promptly drives the girl back to New York to continue her non-batshit-insane new life. Jess' friend Carol Danvers (Ms Marvel) sets her up on a date with a fellow Avenger, Scott Lang (Ant Man), who Jess calls to keep her company over the telephone while she drives back home.

Jess is hired by the Daily Bugle's owner J. Jonah Jameson to uncover the secret identity of Spider-Man. Instead of outing Spidey's secret identity, Jess spends her time volunteering at hospitals and feeding the homeless, all the while billing Jonah. When he figures it out, he threatens to ruin her, ranting about how all those "cape types" stick together. Gee Jonah, I wonder why. One night, Jess is rattled by the appearance of a young girl in her apartment who seems out of it and in need of help. The girl is Mattie Franklin, a young woman with spider-like powers who goes by the name of Spider-Woman. Jess tries to get Mattie the help she needs, following her to a nightclub to discover she is being kept drugged and docile so that a group of men can 'harvest' pieces of her flesh out of an open wound in order to make Mutant Growth Hormone, a drug that temporarily gives ordinary people super powers. YES IT'S TOTALLY AS FUCKED UP AS IT SOUNDS.

Meanwhile, Jess and Scott get closer and when she finds Mattie in her apartment he offers to let her stay the night, which she does. They're pretty cute together. On their first date he asked her not to drink, because Carol had told him that Jess had been having problems with drinking and then engaging in unhappy physical trysts, and while initially (justifiably) annoyed by the intrusion, she comes around on the idea of taking things a little slower. She isn't happy with Carol though, and when Jess hears her voice on her answering machine, her reaction is pretty much the same as mine would be.

Things aren't perfect though, as the self-medicating through booze and unhealthy relationships starts to catch up with Jess. She finds it difficult to confide in Scott, though, because she feels as though asking for help or even admitting you're truly unhappy is a sign of weakness. 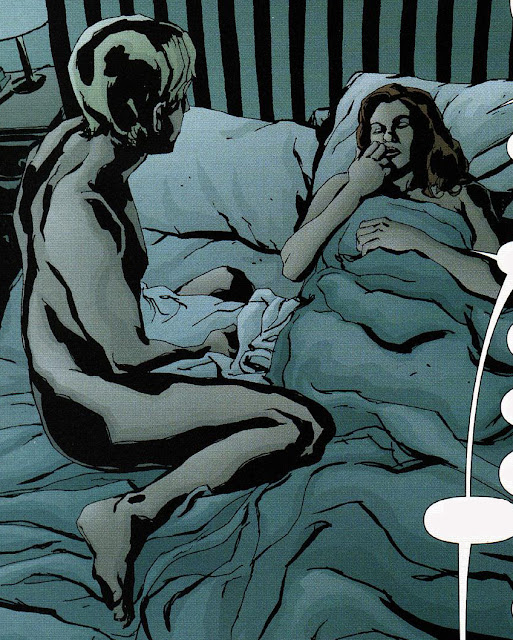 Eventually Mattie is returned to her adopted parents, Jonah himself and his wife, and all is well. Jess is doing some shopping and witnesses a thief attempting to hold up the store, and she intervenes to save the clerk, but finds the exercise draining and a reminder of why she quit being a superhero in the first place.

When she was a kid her parents and younger brother die in a car accident, and she feels responsible since she and her kid brother had been mucking about in the back seat, distracting their dad. They crash into a tanker transporting dangerous chemicals, and after a few months in a coma, Jess wakes up to discover she's an orphan, and has super powers.

She is adopted by the Joneses who seem to have given her the trademark foul mouth I love so much, and goes back to her old school (also attended by one Peter Parker, who will later become Spider-Man, on whom Jess has a massive schoolgirl crush).


Later she takes up costumed heroing for a while but is never really an A-lister. Eventually, she is targeted by Zebediah Killgrave, a villain known as the Purple Man, who mentally and physically rapes her for eight months. His power is the ability to exert unstoppable control over your force of will, so you will do anything he tells you to and you will believe it was your own choice. His instructions are indistinguishable from your own decisions, even after his influence has waned. So eight months of just, the most fucked up shit, I don't even want to go in to it, and one day he decides to tell her to costume up and go attack the Avengers.

Jess gets one good hit in on the Scarlet Witch before the rest of the team beat the shit out of her and she slips into a coma again. As she explains to Luke, her body couldn't take the strain it was under after the months of abuse. Jean Grey is called in to help heal the damage in Jessica's mind. 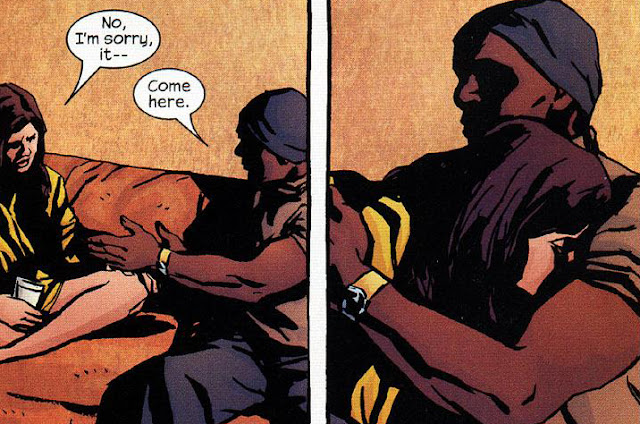 After she woke up, the Avengers offered her a job but she declined, and quit  the superhero business for good, though she still kept in contact with many of them (earlier in the series Matt Murdock acts as her lawyer).

In the present, Killgrave is doing time on The Raft, but the families of some of his victims hire Jess to get him to confess to their deaths, in order to bring them closure. Despite her history with him, Jess agrees. Predictably, hours after their fruitless conversation, he escapes prison and seeks her out for another bout of psychological torture. Luckily, Jean had left a trigger word in Jessica's subconscious and using it Jess is able to break Killgrave's control over her, leading once again to his capture.

Hailed as a hero, Jess accepts the congratulations of her friends and when Scott comes to see if she's okay, she informs him that she's three months pregnant with a child that's not his, and Scott leaves.

Luke approaches her to confess his growing attraction to her, and Jess informs him that he's the father of her baby. 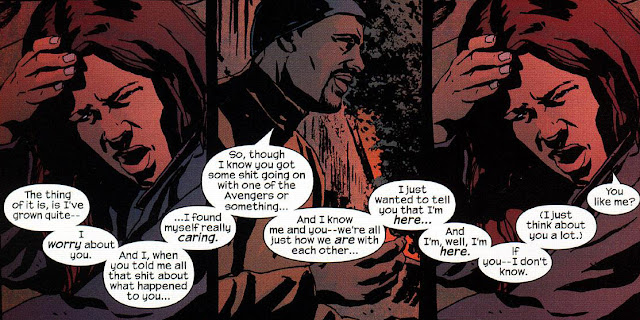 He asks if she wants to keep it, and she says "very, very much". He grins like a fool and the final line is "Alright then. New chapter."

What If? Jessica Jones had Joined the Avengers

The 'what if' comics are based on the notion of divergent plots, what might have happened if a character had made a different choice, or if things had happened in a slightly different way than what is considered the mainstream continuity of the Marvel Universe. In this story, Jessica accepts the offer to join the Avengers as a SHIELD liason, and is the only one to notice Wanda's spiralling mental state prior to the events of the Decimation. Jess also begins a romantic relationship with Steve Rogers. 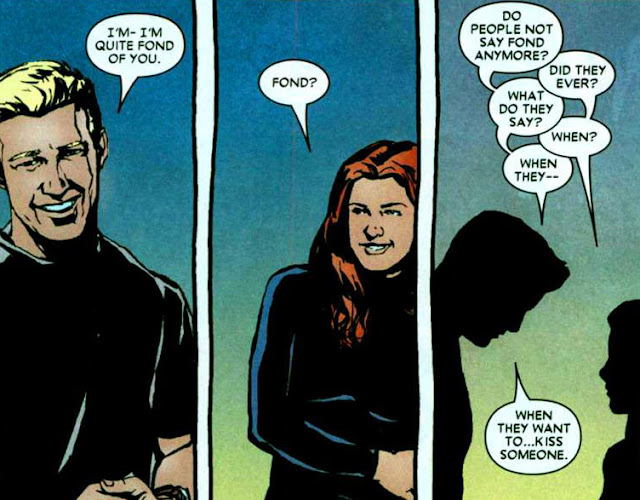 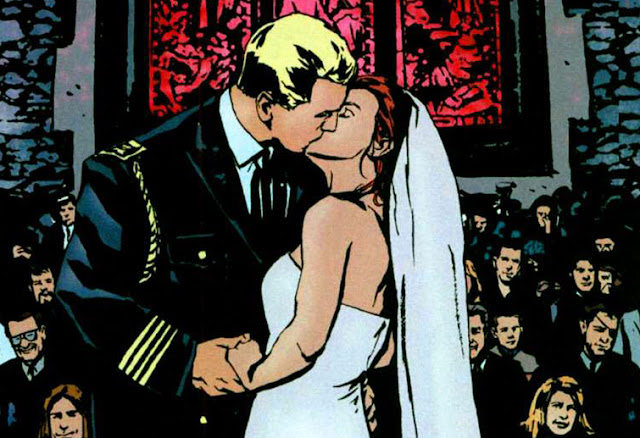 After a one-off 'what if' story and 28 issues, Bendis wrote that he was finished telling the story he wanted to tell, and that the new chapter involving Jess called for more detailed team-ups with the big heroes like Spidey, and so leaving the MAX imprint for the more family-friendly mainstream. As we know, she ended up in the New Avengers after Luke took over leadership of the team when the Civil War ended, and eventually they got married and named their daughter after their friend Danny Rand (Iron Fist).

I really enjoyed focusing on Jess as a character and her past. Obviously going in I knew where she ended up but the story was still compelling and though elements of it were problematic, I think Bendis should be lauded for the complex and evocative story of a female protagonist, something we don't see nearly enough of from mainstream comic books.
Posted by KettleBelle at 1/12/2013 05:34:00 PM