Tumblr is down for maintenance tonight and I promised I'd write a thing about RicStar, so here it is. Kind of an illustrated guide to what happens when you put the homoromantic dramas of two side characters in a book with an already amazing storyline: they become my fucking favourites.

So! Background info time. Taken straight from the Marvel wiki.

Julio Esteban Richter (Rictor) was one of the mutants depowered after the House of M storyline, and losing his seismic powers and his connection with the earth was devastating for him, so much so that he considered taking his own life.


His father was a gun-smuggler and Ric witnessed his death at the hands of Stryfe, a clone of Cable, the time-travelling son of Scott Summers (Cyclops). Naturally, this made working for Cable's X-Force team a bit awkward (I only mention this because I know how much y'all enjoy this kind of convoluted  time travelly storylines. I haven't actually read anything before Peter David's 2005 resurrection of X-Factor). Ric was created by writer Louise Simonson and artist Walt Simonson and first appeared in X-Factor vol.1 #17 (June 1987).

Gaveedra Seven (Shatterstar) is an alien from a planet called Mojoworld who is sent back in time and to Earth, where he joins X-Force and develops a close friendship with Ric that eventually turns into a secret romance. Shatterstar was genetically engineered for brutal gladiatorial combat and has strong notions of a warrior's pride and honour. He first appeared in The New Mutants vol. 1 #99 (March 1991) and used to look like this because he was created by Rob Liefeld (artist*) and Fabian Nicieza (writer):

Now, I'm only new to comics but from what I read, a lot of fans felt their friendship was a little more than that, even though Shatty was supposed to be asexual, or at the very least not interested in human relationships or emotions. The fact that their friendship had become romantic or at least physical was confirmed by writer Peter David in X-Factor #45, where...well, we'll get to it. Anyway okay so I started with the new 2005 X-Factor books and I was hooked pretty quickly. The whole team are great, and I hiiiiighly recommend the series. Quick run down on the team, for those who don't know:

Okay so by the time issue 43 rolls around, Jamie and Layla are missing and Ric and Guido are talking to one of his duplicates, or 'dupes', who kind of splintered off from Jamie Prime to become a priest and raise a family and whatnot. They're asking the Reverend Madrox if he knows where Jamie is when they are attacked by a sword-wielding assassiny type, who lucky for me decides to make his on-panel debut butt first.

Except oh, there's something going on with his eyes?

Without really knowing what's happening, Ric urges Guido not to harm Shatterstar. Guido chucks him around a bit and says he feels way too light for how big a punch he pulls. Ric explains that he has hollow bones or some shit and is from a different planet, and that they've worked together in the past. He knows Shatterstar wouldn't attack them like this.

Star manages to shake off the force controlling him and Ric assures him it's gonna be okay. Guido is suspicious that Star is gonna attack them again, but Star seems to recognise Ric... 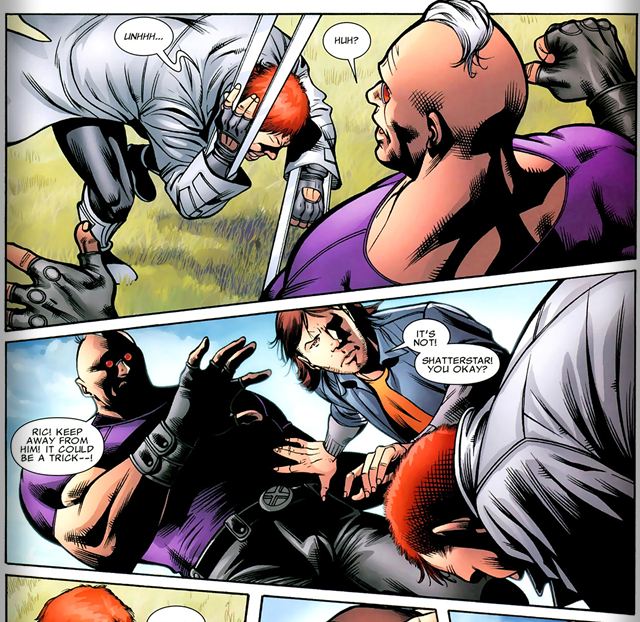 AND THEN THIS HAPPENS

So the boys all head home. Ric accuses Guido of being "skeeved" by the fact that he and Star kissed. Guido says he just never knew Ric was gay, since, you know, a couple issues ago he and teammate Rahne (Wolfsbane) had totally knocked boots. Ric says he was involved with Star "long before" he hooked up with Rahne. Guido says he has no problem with Ric's bisexuality, he's just annoyed that Ric never mentioned it. Then Star wakes up, and explains that while he doesn't remember who took control of him, he knows he returned to Earth because of his feelings for Ric. 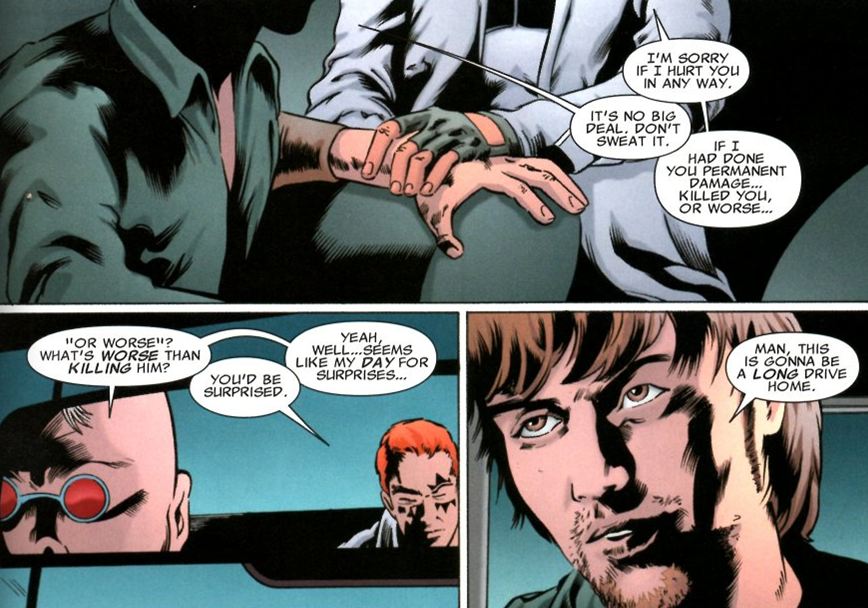 And then Star reveals he can teleport. So they're back in Detroit all quick-like, where they run into a SHIELD agent Val Cooper, who gets the patented Shatterstar first time greeting. 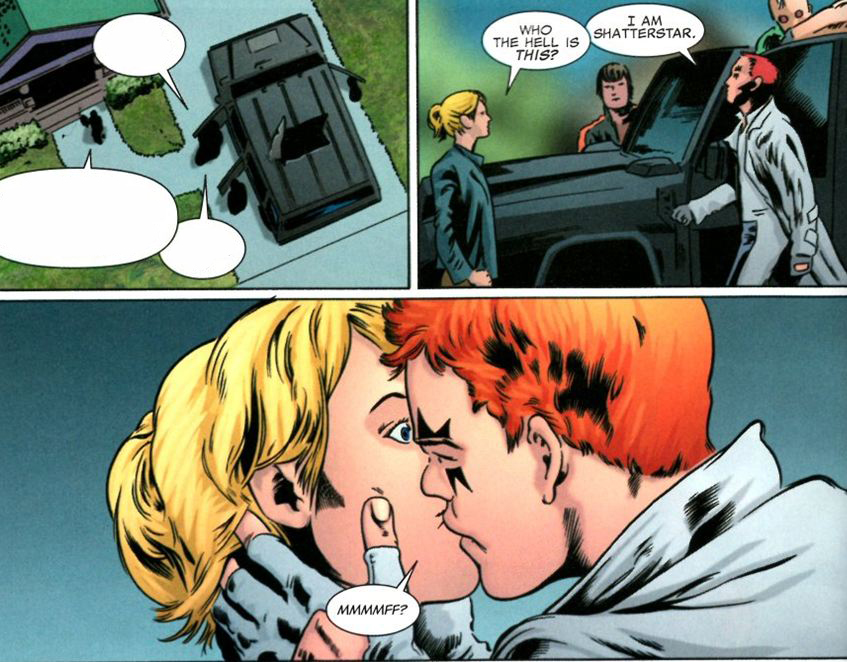 And then they go and defeat the Cortex guy and there's a lot more to it (he's a cybernetic dupe of Jamie from the future and then the aging Doom decides he wants to use it to kill all the mutants) but WHO CARES because OMG SUCH CUTE BOYFRIENDS except obviously Star has a kind of Captain Jack vibe going and Ric has no idea where he stands.

At this point the series got renumbered, so it jumps from #50 to #200, with the children of Reed Richards (Mr. Fantastic) and Sue Storm (the Invisible Woman) Valeria and Franklin hiring X-Factor Investigations to look in to why their mum's disappeared.

While it's definitely not the main focus of the story, Ric and Star's relationship is sensitively written and really interesting, especially as their friendship was one of the first to be read subtextually as a homosexual romance. I'll admit that they are 100% the reason I started reading X-Factor, but the other characters and the overall stories have been so compelling and the art is consistently good. It's a rock solid recommendation and everyone should read it, okay? Okay.
Posted by KettleBelle at 10/06/2012 10:03:00 PM

I'm new to comics too, and I love to learn something about.
I LOVED this post :) thanx