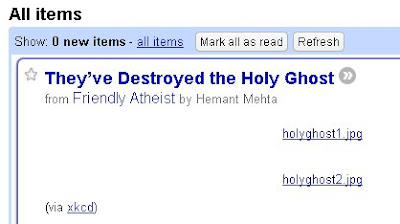 In the media industry, I think the notion of blocking any websites is completely ludicrous. Any source of information is arguably a crucial piece of research needed at any point of the day by the folks charged with staying abreast of current affairs.

Which is why I find the blocking of one of my favourite atheist blogs, Friendly Athesit by Hemant Mehta, totally freakin' lame.

"Cult/occult"? Would a website about Catholicism or Christianity be blocked for the same reason? A quick Google search says no.

Conveniently, I had already seen the comic that Hemant was linking to, as I have a handy dandy RSS feed of xkcd already. I don't know a great deal about how they compile a list of websites to be blocked, but it appears to be ultimately futile, infuriatingly unfair, and a breathtakingly stupid study in trundling, archaic mediocrity.

Good thing I got this out before Blogger was blocked for the reason "IWSS Security Event, Content classification: OH SNAP".
Posted by KettleBelle at 8/06/2008 03:52:00 PM